Fountains Abbey in Yorkshire is one of the largest and best-preserved Cistercian monasteries in the country. It’s also a great place to visit. Here’s our guide.

Fountains Abbey sits just 3 miles south-west of Ripon, close to the village of Aldfield, and offers an enticing glimpse into the life of the monks who arrived here in 1132.

The ancient ruins and sprawling water gardens combine to make a fantastic day out for young and old; whether you’re a history fanatic or an avid wanderer, there’s a little something at the Abbey for all anglophiles.

Construction of the Abbey

Monasticism in northern England has been around since the early 7th century, but the story of Fountains Abbey, and its residing monks, is particularly interesting.

The tale begins with a group of 13 exasperated monks.

These particular monks were part of St Mary’s Abbey in central York and quickly grew tired of the extravagant behaviour of their fellow worshippers. The 13 monks left the city behind and set off in search of greener pastures.

The monks headed north-west until they stumbled upon the beautiful countryside surrounding the towns of Harrogate and Ripon. It was here that Fountains Abbey was founded in 1132 and was quickly named after the springs of water that littered the land.

Three years later, the 13 monks settled into their new life in the countryside and joined the Cistercian Order.

With the Cistercian Order came a group of lay brothers, the modern day equivalent of manual laborers. Prior to the lay brothers’ arrival, the monks had spent large sections of their day tending to the upkeep of the Abbey and the maintenance of the ground.

With the new labourers on the scene, the monks could return to focusing their attention on God, and the men began working hard to make the estate profitable.

While the 13 monks were certainly not lazy, it was the work of the lay brothers that transformed the age-old abbey into a profitable establishment.
From lead mining and cattle rearing to horse breeding and wool production, the lay brothers worked night and day, quickly bringing in more income than the monks could ever have imagined.

Hardships and the Dissolution

While the lay brothers’ endless toil brought with it riches, the Abbey soon met with disaster.

Both a 14th-century raid on the Abbey by the Scots and the Black Death in 1348 contributed to the demise of the estate. The economic collapse of the establishment was almost unavoidable.

Neither the abbot, monks, or lay brothers could recoup the financial losses undertaken. Yet, the Abbey continued to function into the early 16th century.
The arrival of the new abbot, Marmaduke Huby, is partly to thank for Abbey’s new lease of life as Huby brought with him a real desire to save the estate.

While Huby’s efforts were gracious, the Abbey eventually faced its fate in 1539 thanks to Henry VIII’s Dissolution of the Monasteries. With this, the monks, prior, and abbot were handed their pensions early and asked to vacate the estate. Fountains Abbey, and the 800 acres of land that came with it, now belonged to the crown.

A Change of Hands

The crown’s reign of the Abbey was short-lived, and in 1540 Sir Richard Gresham, a merchant and former Lord Mayor of London purchased the estate.
Over the next decade, the estate was passed down through several generations of Richard’s family, before Sir Stephen Proctor purchased the land in 1611.

Fountains Abbey forms part of the wider Studley Royal Park which stretches along the River Skel and encompasses 800 acres of land. While the Abbey is certainly a highlight of the park, you’re going to want to spend some time exploring the Studley Royal Water Gardens, one of the best surviving Georgian water gardens in England.

In the mid-18th century, Yorkshireman and British politician John Aislabie was cast out of Parliament and sent packing to his home county. He arrived in Yorkshire ready to purchase land in order to undertake a garden project. After purchasing Studley Roger, Aislabie, with the help of his son William, set about designing one of the best Georgian water gardens in the north.

Today Studley Royal Water Garden remains very much as it did 200 years ago. The French-inspired gardens boast statues and follies, and visitors can make their way to ‘Surprise View’ a hidden vantage point that offers panoramic views of the estate’s lavish gardens and grounds.

Another park highlight is St Mary’s Church, one of two late Victorian period churches found in Yorkshire. Built-in 1870 in medieval Gothic-inspired architecture, this little church is as beautiful as they come. Inside you’ll find mosaic floors, hand-carved statues, and intricate stained glass windows.

From the church, head to the opposite side of the lake and follow the footpath through the valley. You’ll pass over seven small bridges, (the route is known as the ‘Seven Bridges’), and enjoy splendid views of a babbling stream and ancient oak trees. There’s plenty of walks to choose from in and around Studley Royal Park, but this might be our favourite starting point. 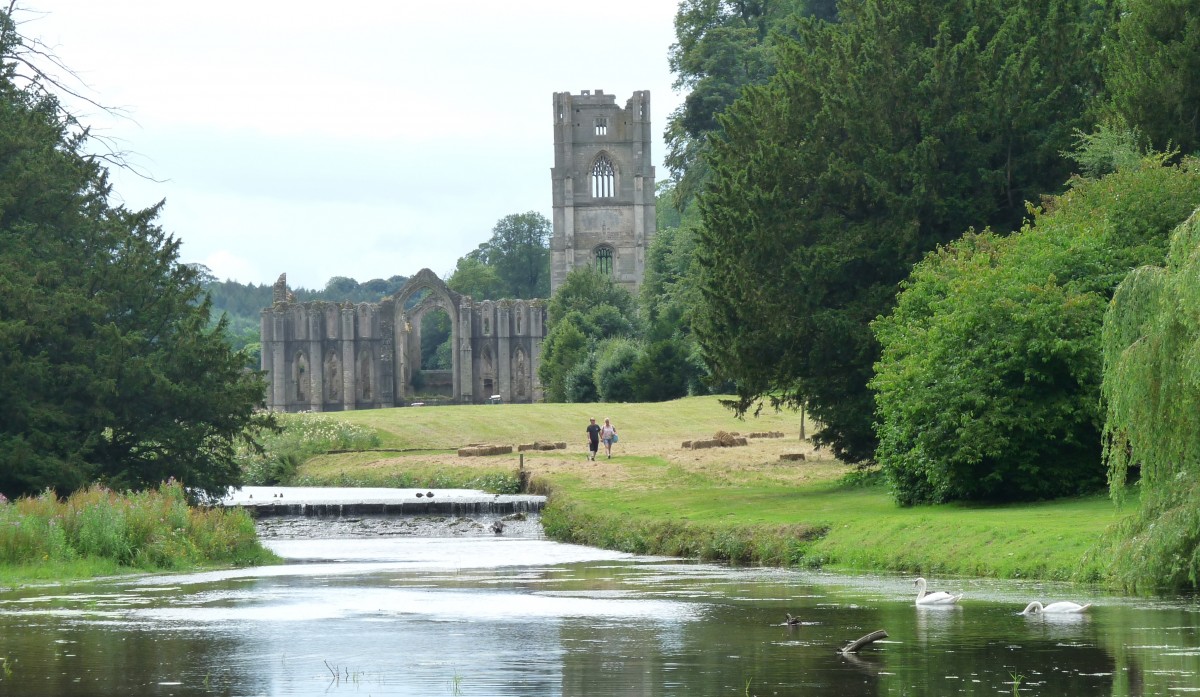 Visitors are welcomed into the grounds of Fountain Abbey to explore at leisure, and there are lots to see! The remains of the Abbey are, of course, the highlight of the estate.

Explore the remains of the sleeping quarters, the kitchens, and the brewing house as you admire the stone architecture and the grandeur of the brickwork. The original Abbey was built using wood before it was replaced and extended with stone.

After being largely destroyed in 1146, construction began once again to improve the structure. By 1170 the Abbey was around 300 foot long.
The attached abbot’s house was one of the largest of its kind in England and parts of the structural remains still extend over the River Skell today.

Next to the Abbey sits Fountains Mill, a former corn mill and one of the oldest buildings on the estate. The mill was extended in the 1150s and again in the 13th century to add additional wheels and a granary. Today visitors can see the wheel in fully working order.

There are several paths running through the estate, some of which wind round to Studley Royal, and there’s ample opportunity to strap the walking boots on and stretch the legs.

Keep your eyes peeled for the resident Red, Fallow, and Sika deer who roam the grounds foraging in the grass. Watch out also for the Temple of Fame which overlooks the Abbey and park too.

A popular walk is from the Abbey to the Studley Royal Water Gardens, where you’ll pass ancient lime, oak, and sweet chestnut trees as you follow the river to the 18th-century gardens.

Many visitors end their walk to Studley Royal with a trip to the tearoom for refreshments before returning to the Abbey.

HOW TO GET THERE?

Here are the directions (from the National Trust) by road.

Things To Do At Fountains Abbey

Aside from the everyday attractions, Fountain’s Abbey has a lot going on. If you plan to visit during the summer months, it’s best to check the National Trust website for upcoming art exhibits which tend to take place in the gardens.

Similarly, the land is a popular shooting ground and can sometimes be closed for local shoot parties. Other events include ‘Fountains by Floodlight’, outdoor cinema screenings, and reenactment weekends.

If you’re visiting in the spring, expect to enjoy the resident wildlife waking from the dark winter, while summer brings with it blooming wildflowers dotted across the land. Those here in autumn can enjoy the changing colour of the leaves, while winter is a family-orientated affair at Fountains and you can expect Christmas craft markets and carol singers galore.

Fountains Abbey and the surrounding Studley Royal Park are fine examples of well-kept countryside in northern England. From historical abbey ruins to wild fallow deer, from lake walks to secret garden views, this patch of Yorkshire is picture-perfect.

What’s more, Fountains Abbey makes for a great stop en-route to the Yorkshire Dales, and the nearby towns of Ripon and Harrogate are well worth visiting too while you’re in the vicinity.

Remember To Check Out Our Most Popular Posts:

The Cotswolds: The 20 Best Places To Visit

English Villages | What Makes The Perfect Village In England (With Examples)

The Kings And Queens of England: From William the Conqueror To Elizabeth II

The Yorkshire Dales | The Best Places To Visit

Gorgeous Images Of The English Countryside

Take our London Quiz: How Well Do You Really Know London?