What is it about the English that they spend so long discussing their weather?

We take a look at what lies behind the national obsession and find out how the language has evolved to cover every aspect of the Englishman and woman’s favourite topic of conversation.

Don’t Forget Your Umbrella…
On a day in June,
It can rain at noon,
From a sky where no cloudlet lay.

So goes Noel Scott’s poem “England’s Weather” – and perhaps it’s that very unpredictability that goes some way to explaining the topic’s hold over the English psyche.

Britain sits at the end of a “storm track” – a narrow zone over the ocean down which storms travel, driven by prevailing winds and generated by warm air from the equator meeting cold air from the North Pole.

Then there’s the Gulf Stream, which makes the British climate warmer than it should be for its latitude: London is actually farther north than Calgary in Canada, but its average January temperature is a positively balmy 5° C, a full twelve degrees warmer than its Canadian cousin.

Add to that Britain’s status as an island nation with lots of moisture in the air, and you have all the ingredients to make weather forecasting an extreme sport.

Perhaps it’s not so surprising that a 2015 poll calculated that English people spend the equivalent of five months of their lives discussing whether or not it looks like rain.

An alternative theory is that the English obsession has less to do with the country’s geography and unusual weather patterns than with a simple desire to navigate social situations.

Talking about the weather can be a way of initiating conversation, avoiding an awkward silence or even gauging someone else’s mood.

Research into English weather – related conversations – for yes, such a thing exists – has shown that people almost always begin the topic in the form of a question, even if just through the tone of their voice.

And there are rules to be obeyed too: the person answering must agree.

If, for example, Janet says, “Nice day, isn’t it?” and John replies, “No,” he is in serious breach of social etiquette – and Janet is quite entitled to refuse to lend him her sun tan lotion.

The theory goes that all cultures have these kind of conversation pieces but that the topic varies from place to place.

In some parts of the world, the questions that act as icebreakers will be quite different – in the Middle East, China or South America, for example, people might ask about someone’s job, age or even weight.

But for the English, with their famous reserve, a less personal subject is more comfortable.

The weather fits the bill perfectly.

English Weather: A Scorcher Or A Kelsher?

Not surprisingly, all that conversation has bred a myriad of words and expressions to describe the weather in its many forms.

Wherever you are in England, a scorcher is a particularly hot day – but if t here’ s a kelsher on the way you’ ll be needing your waterproofs; it’s a heavy fall of rain often accompanied by high winds.

A light, misty rain is known as a “smirr” all the way from Scotland to the south of England (although in the latter case it is spelled “smur”).

There are even words for rain at a particular time of the year. A sudden burst of precipitation in May, when the usually milder temperatures mean that cattle have been returned to the fields from their barns, is known as a
“Cow-quaker”.

Perhaps the most famous of animal-related descriptions is “It’s raining cats and dogs”.

Its first recorded use to describe a heavy downpour was in the seventeenth century but there’s disagreement over its origins.

Some favour a literal interpretation, believing that when heavy rain fell cats and dogs would be washed from thatched roofs, thus appearing to have fallen from the sky.

Others believed that poor drainage was behind the phrase, and that heavy rain would disgorge animal corpses that had previously been washed into drains.

A rather more pleasant explanation is that the expression stems from myth. Sailors considered cats to have influence over storms, whilst dogs were often portrayed alongside the Norse storm god, Odin.

Local dialects are a particularly rich source of weather words.

In the southern county of Somerset, a “letty” is just enough rain to make outdoor working difficult, while in neighbouring Devon and Cornwall a “dimpsey” is a very dull day with low cloud and fine rain.

Other expressions give a hint as to the social differences within England.

In Lincolnshire, particularly forceful rain is described with the phrase “raining for ks’tines down’ards”.

The tines here would belong to hay or dung forks, conjuring up a vivid picture of the almost solid appearance of rain dashing to the ground.

Agricultural workers would use such forks in their daily life and hence would appreciate the metaphor.

Further south, the same weather is described as “raining stair rods”. Here, the comparison is with an altogether more genteel feature of indoor living.

By the late 1700s, stair rods – thin bands of metal – were being used to hold carpets in place on flights of stairs, allowing them to move up or down from time to time to prevent excessive wear at the edge of each step.

Despite the English love of discussing the weather, it appears it’s still possible for some wonderful words to have passed from use.

Dating back to the 17th century, a “gleen” was a sudden burst of warm sunshine, and a day with intermittent sunshine was known as “gleamy”.

Sunny, clear weather that was nevertheless freezing cold was known as “foxy”, while in the 19th century naval slang for a fine day, perfect for starting a journey, was “armogan”.

It seems likely that with such a popular topic of conversation, the words and phrases used to describe the English weather will continue to evolve and change.

But whatever words you choose, if you find yourself in England be prepared to talk about the weather! 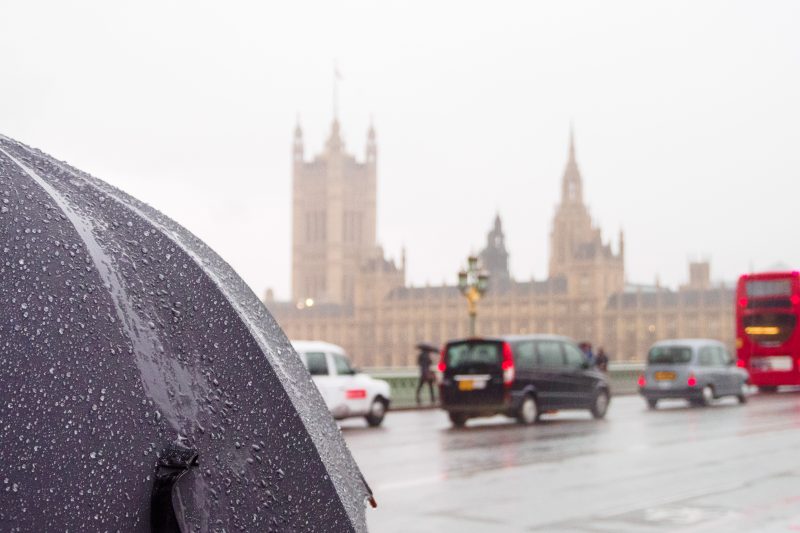 %title%
The English Weather: The Making Of A Local Obsession
Description
We take a look at what lies behind the national obsession with the weather in England, and find out how the language has evolved to cover every aspect of the Englishman and woman's favourite topic of conversation.
Chris Young
Chris Young
England Explore
EnglandExplore
Publisher Logo